For breaking news and live news updates, Join us on Whatsapp The population rose by 72 million over the...
Read more

What is a common link connecting a nearly successful 30-minute bank robbery, a phone snatching near a Metro station, extortion by a man posing as a police officer, and a fake heist at a jewellery showroom orchestrated by its owner?

All the four crimes, officers investigating the cases in the last two years found, had the suspects using toy guns.

As odd as it may sound, toy guns are not uncommon “weapons” in the hands of criminals in Delhi. Over the last two years, there have been at least 14 recorded instances of dummy firearms being used in crimes, ranging from bank robberies to street crimes, such as snatching, and extortion to fake robberies. 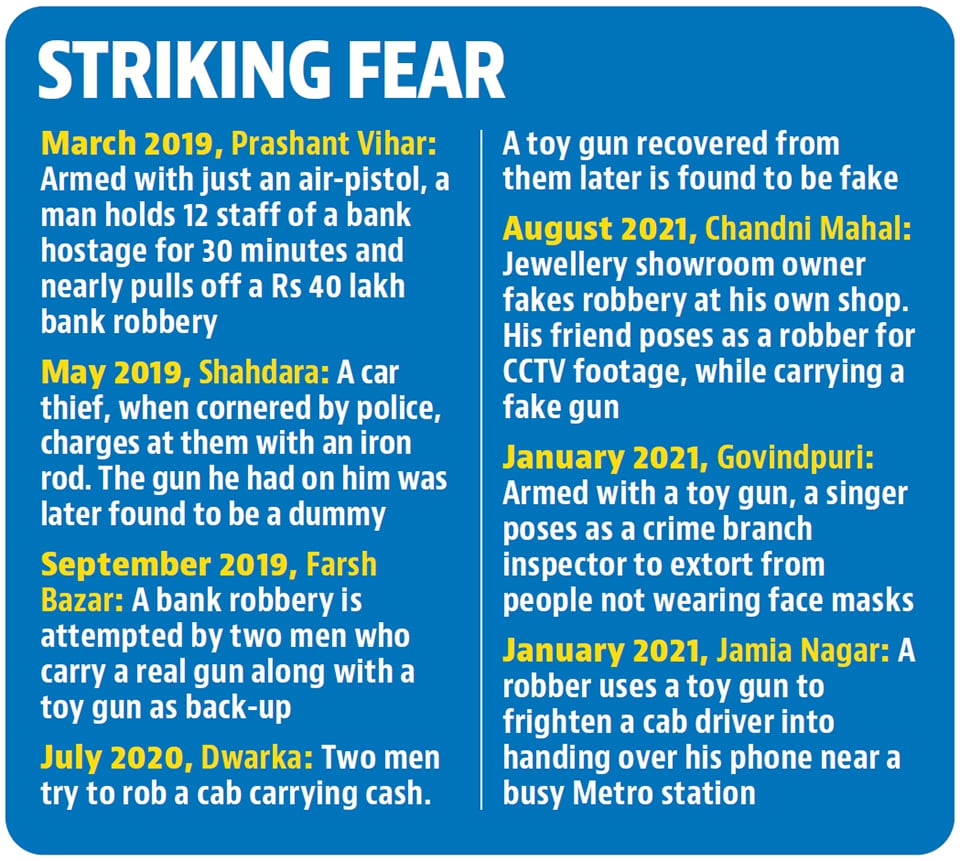 In fact, two of the last four bank robberies in the national capital involved toy guns – in one instance it served as the lone weapon, and in the other as a back-up weapon.

And this year, in a span of three days in January, there were three separate toy guns seized by the Delhi Police. In one of those cases, it was used for extortion by a club singer posing as a crime branch inspector and using the fake gun to extort people not wearing masks in Govindpuri. In another, a dummy gun was used to rob a mobile phone from a cab driver near the busy Jamia Nagar Metro station.

In none of the 14 known instances, did the victims suspect that they were being threatened with a fake gun.

When a mobile phone trader, who lost money in gambling, decided to target a bank in outer Delhi’s Prashant Vihar in March 2019, the only weapon he took with him was an air pistol — that is usually used to shoot balloons. Yet, operating alone, he was able to hold a dozen staff hostage for good 30 minutes and collect ₹40 lakh in cash, until the bank manager decided to challenge him and tackle him down.

Till the time he was brought down, everyone in the bank believed he was wielding a real gun. In fact, the bank manager on duly even submitted the robbed cash and the gun to the police believing it was a real weapon. It was only when the police were examining the weapon, that they noticed it was a dummy weapon.

Then in September, the same year, two men barged into a bank in east Delhi’s Farsh Bazar and briefly made away with nearly ₹9 lakh in cash. Police said that of the two weapons they brought along, one was a toy gun that looked real.

While the toy guns in none of these 14 instances aroused suspicion, an incident in which a woman mocked some robbers for threatening her with “toy guns” took a tragic turn. In the robbery that took place in New Friends Colony, the robbers shot her in her foot to prove that they were carrying real weapons.

Experts say that a host of reasons prompts criminals to opt for toy guns. Prakash Singh, former Uttar Pradesh Police chief, says that toy weapons are able to inspire the same kind of fear in victims that real guns do. Sometimes, a toy gun is used as a back-up of a real firearm as it comes at only a fraction of a cost of the genuine weapon.

“A criminal knows that with a toy gun, he won’t be able to kill someone, even if the situation turns ugly. Moreover, he won’t be tried under the Arms Act,” says Singh.

The Delhi Police does not maintain data on the use of toy guns in crimes, or the seizure of such “weapons”.

When it comes to real guns, there were at least 672 cases last year when firearms were used in Delhi. The police went on to recover 2,735 illegal guns through last year.

RP Meena, deputy commissioner of police (south-east Delhi), says that the offence cannot be deemed non serious just cause a toy gun was used in it.

“We do not apply the Arms Act, but it is still a robbery, and the charges stand the scrutiny of the court,” says Meena, whose team recovered two of the last three toy guns in Delhi.

But Prakash Singh believes that the use of toy guns falls in a grey area. “It is less serious than using of a real gun, but more serious than snatching without the use of a weapon,” he says.

While these dummy guns maybe not capable of causing deaths, they are not entirely harmless either. Four years ago, a boy in Shahdara lost his left eye after being hit by a pellet fired from a toy gun being wielded by his neighbour.

Meena says that these dummy guns are found in normal toy shops, online shopping platforms, sold as Diwali crackers and even in the form of cigarette lighters. “They look as good as real. And there is no ban on them,” says Meena. If convicted for a robbery using even a toy gun, the punishment remains imprisonment for up to 10 years.

Delhi Police spokesperson, Chinmoy Biswal, attributes the use of toy guns by some criminals to the “difficulty” in procuring a real gun.

“It is not so easy for criminals in Delhi to obtain a real gun. The non-habitual criminals may find it easier to use a toy gun rather than find a real gun,” says Biswal.

“We ensure that using a toy gun doesn’t reduce the gravity of the crime in court,” Biswal adds.

The toy guns, sometimes, even catches the police by surprise. A vehicle thief, when surrounded by the police in Shahdara, chose to attack them with an iron rod, despite possessing a pistol.

The mystery was solved only when the suspect was overpowered. An examination of the gun revealed it was only a toy.

For breaking news and live news updates, Join us on Whatsapp Salman Khan revealed that a few of his family members have contracted the...
Read more
बॉलीवुड

For breaking news and live news updates, Join us on Whatsapp On May 6, three Al-Badr terrorists were killed and one surrendered before the...
Read more

Gorakhpur youth Helped 400 Corona patients within 25 days; Providing beds and oxygen in the hospital at midnight, saving many lives by providing plasma...