An overview of justice delivery across all states

The US House of Representatives moved toward a late-night vote on President Joe Biden's $1.9 trillion coronavirus aid bill...
Read more

The second edition of the India Justice Report by Tata Trusts, compiled in collaboration with civil society organisations to assess the capacity of various states to deliver justice, was released on Thursday. The report uses statistics compiled by states to rank 18 large and mid-sized states, and seven small states, and compares their performance based on parameters across what it calls the four pillars of the justice delivery system: judiciary, police, prisons, and legal aid. Using a quantitative measurement of budgets, vacancies in human resources, diversity in gender, workload, and infrastructure, the report uses 87 indicators to rank a state against other states, many of them over the last five years as well as since the previous report. Here’s a look at the highlights on how states performed in 2019-2020.

In both reports — the first edition corresponded to the year 2019; the second corresponds to 2020 — the topper remains Maharashtra, while Uttar Pradesh ranks the last among large and mid-sized states. Two other states, Punjab and Uttarakhand, remain at the same rank as before: 4th and 15th, respectively. But across the categories, two states have shown a remarkable jump in rankings: Telangana and Jharkhand, now at the 3rd and 8th positions respectively, have shown a concomitant rise of eight spots each. Karnataka and MP, on the other hand, recorded the biggest drop in ranking, by eight and seven spots respectively. 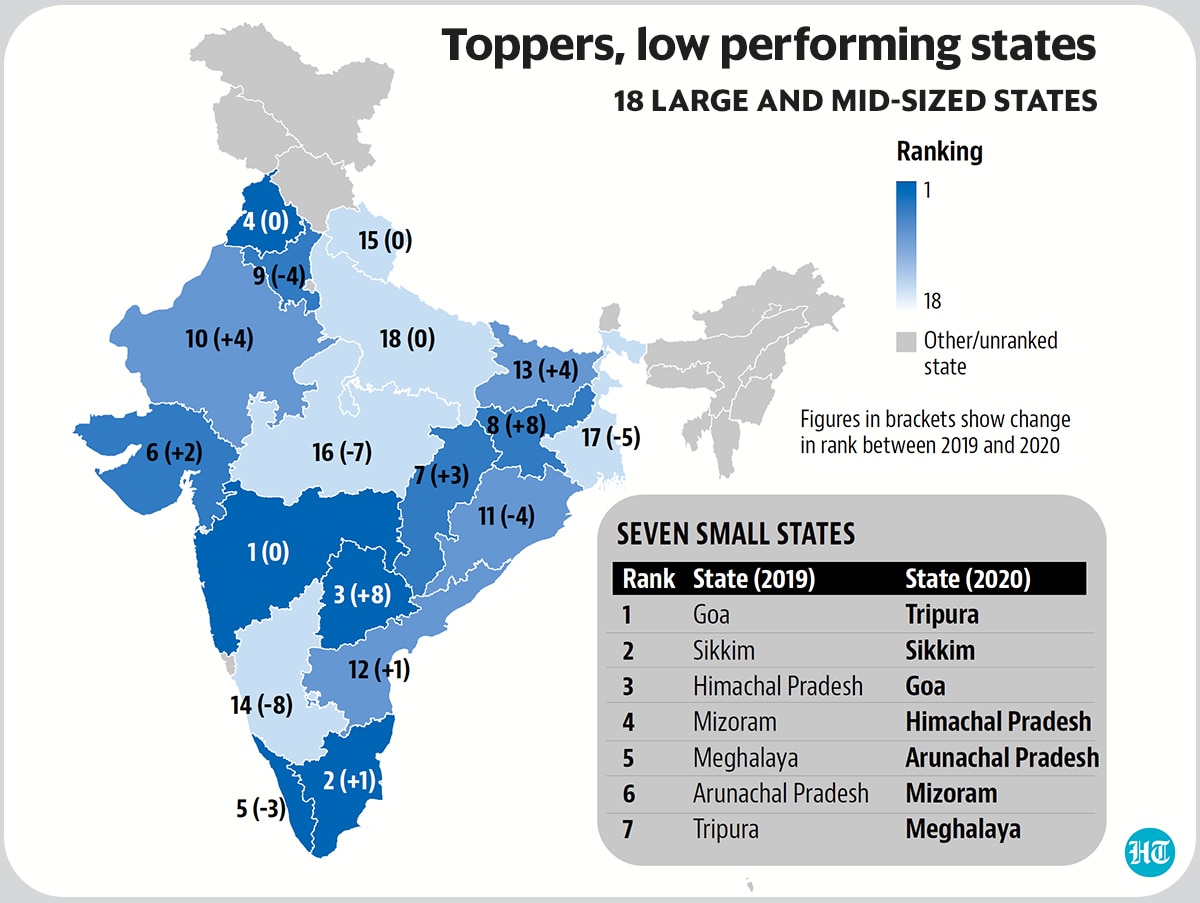 Among the small states, Tripura has shot right up to the top from the bottom of the pile. Sikkim maintained its second position in these seven states. Among all states, southern and western ones, in general, ranked better. The report has not ranked the UTs and four states where the Armed Forces Special Powers Act is enforced (Assam, Jammu and Kashmir, Manipur and Nagaland).

The overall rankings, though a composite measure of a state’s standing in the country, do not mean that a state actually has the best or the worst overall justice delivery systems in place. The overall ranking is a result of a state’s ranking across the four pillars of justice delivery system. To understand what a state lacks or is good at, one needs to look at these subcategories. There is only one state, Jharkhand, whose rank has improved across the four pillars. Only two states, Bihar and Telangana, have got better at three pillars, while 12 states have ranked better in one or two pillars. On the contrary, three states have recorded a drop in their ranks across all four pillars. These include Madhya Pradesh, West Bengal, and Haryana. Three other states have recorded a drop in their ranks across three pillars. These are Kerala, Maharashtra, and Gujarat. To be sure, a drop in ranking does not necessarily mean that the state of affairs in a state has got worse in absolute terms but that the other states have improved more than it, making them rank better. In fact, every state has shown improvement in at least some of the indicators across the four pillars.

3. Here’s how states got better Maharashtra, the state that has ranked first overall, actually ranks first in only one pillar, legal aid, while it is a laggard in terms of police, where it is behind 12 other states. Chhattisgarh has made big gains in judiciary (an eight-spot jump) primarily due to increased number of high court judges and decreased pendency in subordinate courts. The state has also made an eight-spot jump — the biggest among all states — in terms of police. This is primarily because of an increase in the total number of officers and a more diverse police force in terms of gender and caste representation other than decreased vacancies. Rajasthan has made big gains in prisons (ranking 1st in 2020 compared to 12th in 2019), according to the report because of better budget utilisation, more officers and cadre staff, reduced overcrowding and an increase in women prison staff. In terms of legal aid, Bihar has made the biggest gain (ranking 2nd in 2020 compared to 16th in 2019). This, the report said, is because of better utilisation of funds, more legal clinics, and an increase in the number of women in paralegal services.

Although the report primarily ranks states for the sense of competitiveness, it also highlights several shortcomings in the justice delivery system at the national level. This includes a lack of diversity in the police force and judiciary, high vacancies across pillars, high prison occupancy rates, high proportion of undertrial prisoners, case pendency in high courts and subordinate courts, and access to justice delivery institutions being skewed against rural populations.

Neena Gupta has said she did not want Masaba to go to Goa with friends. The senior actor also went to Goa and stayed...
Read more
बॉलीवुड

Fardeen Khan may star in No Entry sequel, Aneez Bazmee says the actor is ‘looking forward to it’

Director Anees Bazmee, who is ready with the script for No Entry sequel, has said Fardeen Khan has expressed his desire in making a...
Read more
बॉलीवुड

Richa Chadha calls Ali Fazal a progressive and equal partner, says ‘don’t let it get to your head’. Here’s his reaction

Richa Chadha has said that she has found an equal partner in boyfriend Ali Fazal who cooks well, works out with her and is...
Read more

In two days from now, India will start the second phase of Covid-19 vaccination across the country. Those above the age of 60, or...
Read more